GLORIOUS GARDENS returned to Birmingham this past weekend, showcasing five residential gardens and one public garden.  A highly anticipated biannual event, it allowed access to private gardens across the horticultural spectrum and also benefitted the mission of the Birmingham Botanical Gardens: promoting public knowledge and appreciation of plants, gardens, and the environment. 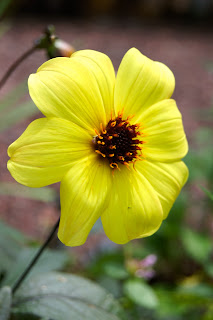 Of course, I did not want to pass up the opportunity to participate and enjoyed the day touring the private gardens with my friend, Stacy Pulliam, and my daughter, Maddie! Here were some of my favorite aspects of the tour and thoughts about how they were similar - and how they were different!


FIRST STOP was the Clark Garden on Canterbury Road: a stately, tudor style home nestled in a residential neighborhood with a formal front yard with parterre hedges and boxwood.The back, however, allowed me to glimpse what fun and carefree spirits these homeowners must be!  What creative bed edging recycling upturned wine bottles! 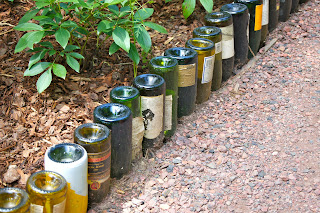 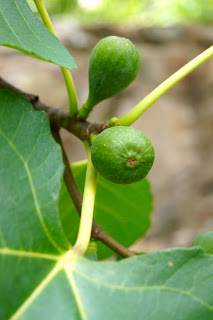 Fig trees and other fruiters
such as apple and blueberries!
See the figs beginning to form? 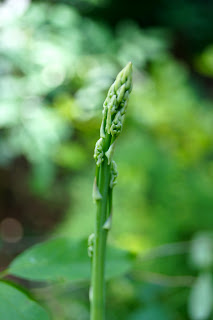 Asparagus!
A patient vegetable which takes 2-3 years
to establish before harvest. 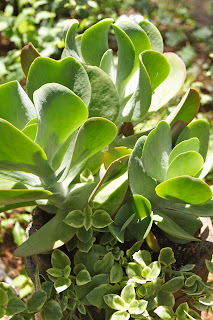 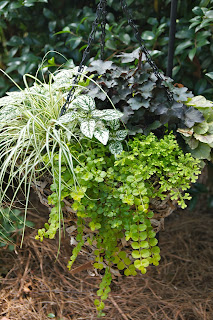 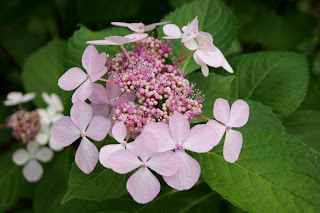 Hydrangeas of many shapes and forms!
I really liked the loose lace-caps in pinks and lavenders 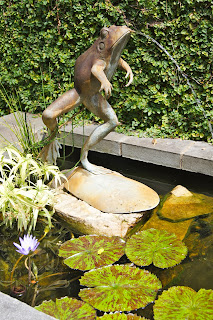 And last, but not least...
This whimsical fountain frog spouting water
into a stone koi pond

NEXT STOP was the charming bungalow of Jane Ross, a local landscape architect, and husband, Neil. Most charming was the backyard "guest house" which was a converted garage opening onto the quaint courtyard.  A covered flagstone patio area complete with "bottle tree" beams and metal roof completed this relaxing retreat.  I really liked that she had a display showing the house/garden plans and its transformation through the years.  I also really liked: 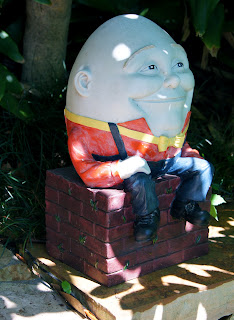 Humpty Dumpty
who greeted visitors from his perch on the wall! 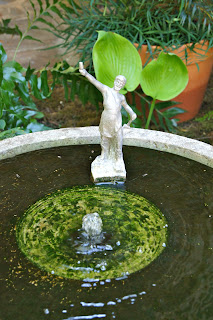 A miniature Vulcan
who presided over the burbling patio fountain. 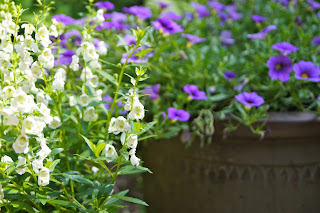 And annuals in pots
Angelonia
(the summer snapdragon)
seen here in white, also comes in purple, lavender and pink

Calibrachoa
(million bells - which looks like a miniature petunia)
seen here in purple, comes in many colors

THIRD STOP was on Greenwood Street in Homewood.  After descending stone steps which encircled a front yard pond, this casual, relaxed home of Barbara Saurer and Brad White boasted several native and shade loving plants. A covered back porch opened onto the expansive backyard which had a stone drainage ditch bisecting the lot.  On the back "40" several chickens took residence on the property in the fenced coop area. 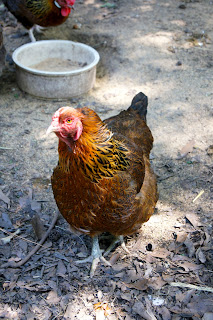 These chickens (hens?) look content
and seem to have no plans to 'Run'. 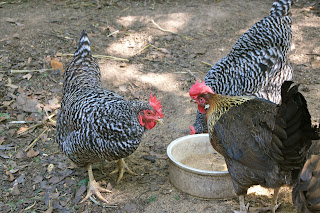 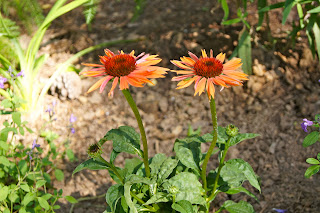 Appears to be some type of coneflower and
my daughter thought the petals looked like pink lemonade! 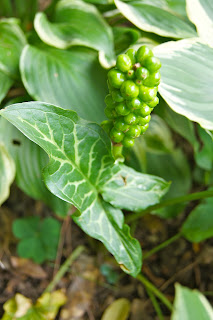 Among Hosta this unusual plant was found.
Stems terminated in berried clusters and the
deeply veined leaf was spade-shaped!

LAST TWO STOPS were on Vestavia Drive in Vestavia Hills.These two houses were stately, elegant and were situated on large estate lots owned by the Corys and Clarks (different family).  Both had pools - which my daughter wanted to try - and both had a more formal style of landscape.  However, in the back, several perennials and native plants caught my eye, plus two well-laid vegetable/herb gardens that made me very envious! 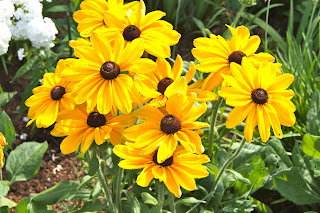 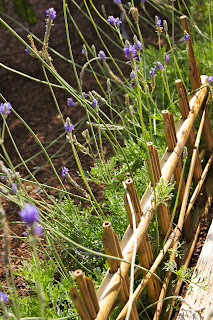 I liked the formality of Lavandula (Lavender)
contrasted against
this simple rustic border edging
in the herb/vegetable garden. 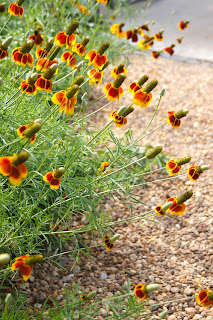 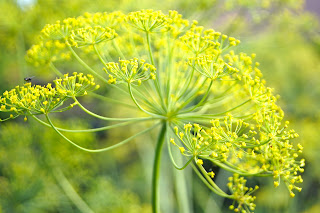 Herb - Dill - was in full bloom in the vegetable/herb garden. 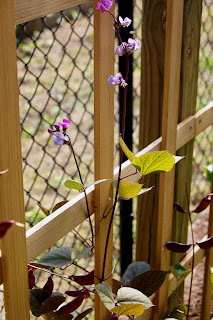 more commonly known as Hyacinth Bean
is a fast growing twiner
and will clamber up this trellis in no time! 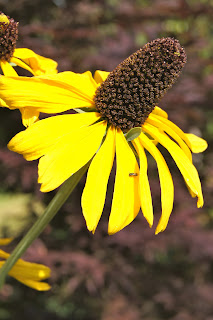 HOW THEY WERE ALIKE...

every garden had an "edibles" area - whether is was herbs, vegetables, fruits or a combination of the three.  Most commonly seen vegetables were tomatoes, peppers, eggplant and squash complimenting herbs basil, rosemary, fennel and thyme.  This reinforces my belief that this "trend" of edible gardening will be a permanent "must have" for gardens.  It is an element I truly try to encourage homeowners to adopt.  Most edibles have the added ornamental value to its culinary uses.

I also noticed all the gardens were alike in use of some native plants.  Each and every garden had one or more native plants.  Another "trend" that I feel like is here to stay in that native plants are more easily adaptable to our environment!

All used succulents - mostly in containers - another area I feel like will escalate in popularity and use.  Drought and heat tolerant - mostly perennial - and exotic and unusual.  Why not use them?

All gardens had a water feature, whether it was a fountain, pond, or pool.  This design feature is appealing especially in the heat of summer when the trickling, tranquil sound of water cools and refreshes! I always try to work one in if possible.

HOW THEY WERE DIFFERENT...

each garden was unique to itself and no two were completely alike.  While they had similarities mentioned above, the BBG did a great job of finding a diverse group of homes in style, function and design.   The personality of the homeowner could be glimpsed with these peeks into their gardens and I appreciate these families opening their gardens to the public.

Lastly, not all gardens had the element of fragrance.  To me, this is also a very important garden feature that I always try to include in my designs.  So, the first stop, really stood out to me because the visitor exited the garden by way of a fragrant arbor where HUGE gardenias perfumed the air.  Check out this bloom! 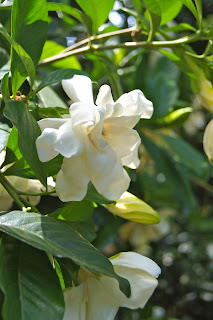 So, in 2014 - mark your calendar for this event - I hope this inspired you to attend next time!  You will not be disappointed!

Promote Your Page Too

Hilary
Birmingham, Alabama
My primary objective is to assist clients with garden design and be a constant for them during the transition period of installation. Another purpose is to guide the design process and assist in the selection and placement of trees, shrubs, flowers and hardscapes to allow the homeowner maximum enjoyment of their property.